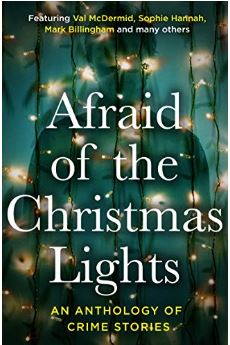 Afraid of the Christmas Lights

I still have the message in my WhatsApp history-

What do you guys think about putting together a charity anthology?

A reminder of just how big a little idea can grow with the right team behind you.

This particular ‘little idea’ started life as Afraid of the Light, became an Amazon bestseller and this December, gave birth to a new child, Afraid of the Christmas Lights- a festive
collection of shorts from some of the biggest names in crime fiction.

It’s difficult to pinpoint exactly what prompted me to suggest writing an anthology to my friends. Perhaps it was the conversation I had with Dom Nolan about the beauty of short stories being that you can read them in one sitting. Or perhaps the one I had with Elle Croft about how solitary the writing process can feel.

Regardless of the prompt, I’m so glad my suggestion was met with such enthusiasm. In the end, fourteen of us teamed up, self-publishing Afraid of the Light in the wake of
Covid-19, with all proceeds going to the mental health charity, Samaritans.

What started off as a fun venture with fellow storytellers was given impetus and focus by the first lockdown. We quickly realised that the anthology could have a real impact in terms of raising both funds and awareness of issues such as loneliness and anxiety being generated by the
pandemic.

Though none of us could have imagined how the book would take off!

Afraid of the Light became an instant Amazon bestseller, was featured in the national media and even caught the eye of the late John Sessions, who offered to narrate an audiobook for us which will be available soon. We were all devastated by the news of his recent passing and hope it will prove a worthy valediction for a man known as a wonderful listener.

Little over six months later, we teamed up again, this time with some of the biggest names in crime fiction joining us as guest authors.

Val McDermid and Sophie Hannah came on board for this second volume, the profits of which are going to
frontline domestic abuse charities, ESDAS and Rights of Women. Mark Billingham contributed a Tom Thorne story, while Richard and Judy bestseller, Harriet
Tyce, penned a Blood Orange original.

As the project broadened in scope, so too has the cast of people working behind the scenes. The new collection has been deftly edited by Miranda Jewess, the senior
commissioning editor for the Viper imprint at Serpent’s Tail. And Claire Ward, the creative art director at Harper Collins, designed our beautiful jacket, with
its creepy shadow man lurking behind a wall of fairy lights.

It has been inspiring to see such an exciting array of professionals from across British publishing buy into our guerrilla style. Nobody is paid for their work or time; we publish
through KDP; do our own marketing, donate our profits to causes close to our hearts—and, of course, have ‘slay’ loads of fun along the way!